He was born in 1939 in North China by Korean parents in the area of Keriingk. In 1945 he moved with his family to Seoul, South Korea.

He began practicing at the Headquarters of Chung Do Kwan Tae Kwon Do 60 years ago. His instructor was Grand Master Woon Kyu Uhm (9th Dan WTF), and President of Kukkiwon for 49 years.

He graduated as a Mechanical Engineer from the Hanyang University in Seoul. He used to be a trainer of the South Korean Marines. He came to Greece in the summer of 1979 and instructed at the Tae Kwon Do Athletic Club of Pagrati for 30 years.

He is currently the Technical Manager of the Club and certified examiner from the Kukkiwon at all levels, both in the aforementioned club and also in other clubs in Greece and Cyprus. 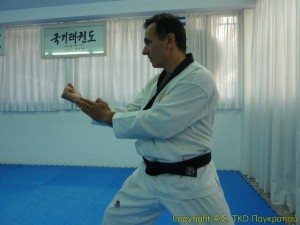 He was born in 1960 in Athens.Master Spiros Loumanis. He began his practice in Chung Do Kwan Tae Kwon Do 30 years ago, under the instructions of Grand Master Choi Duk Kyu at the Tae Kwon Do Athletic Club of Pagrati.

He became chief instructor of the Club in 1998. He is a graduate Coach from the General Secretariat for Sports. He is also a graduate economist from the University of Piraeus.

Lee Won Kuk – Founder of the Chung Do Kwan Tae Kwon Do.

Choi Duk Kyu – 8th Dan, Chief Instructor at the Chung Do Kwan Taekwondo Headquarters, Instructor for 30 years and examiner in the Tae Kwon Do AC of Pagrati.

Spyros Loumanis – 6th Dan, Instructor at the Tae Kwon Do AC of Pagrati.